For over a century, we stood at the edge of microscope resolution and cursed the inexorable blur of diffracted light. Instruments improved, but the fog never lifted. Then, one man stopped trying to control how light behaves. Armed with a donut-shaped laser beam, he instead commanded where it shines and untethered resolution forever.

The shape of a donut seems mundane. Maybe that’s because we see it everywhere. It is, of course, that lovely pastry. It also moves cars along the road, keeps children safe in pools, and it can decorate an earlobe, a finger, or even a house door in December.

But the donut is quite remarkable for its simplicity.

A torus – or donut – is formed by rotating a circle about an axis that lies in the plane and outside of the circle.

Arguably, the donut is not the most common shape in nature. That distinction may belong to the sphere of rain drops or the hexagon of honeycomb and snowflakes. The donut or torus is, however, the shape of power. Think of Earth’s hazardous radiation belts of charged particles trapped from solar wind. They’re shaped into tori (that’s plural for torus) by the Earth’s bipolar magnetic field. A torus is also the chosen shape of a tokamak, that plasma-confining reactor that may someday produce energy by nuclear fusion. And in optical microscopy, the donut delivered a powerful blow to a stubborn paradigm curtailing the resolution of microscopes for decades.

It was the optical equivalent of a sonic boom riding on a ring of light.

Light is a self-absorbed celebrity

Among the stimuli that evolution chose for us to perceive the world, light is like a self-absorbed celebrity. Light is vain. No one can move faster than her. Light is also capricious. She refuses to make up her mind about being a particle or a wave. That latter whim vexes optical microscopy. No matter how sophisticated the instrument, a point of light viewed through a microscope becomes a smeared blob because light waves passing through the aperture of an objective diffract. The result is that when two points of light are close enough to have overlapping smeared blobs, we can’t tell them apart. That is, there is an inherent limit to the resolution of a microscope dictated by the very nature of the signal it detects. At the microscale, this doesn’t matter. The diameter of the smear is in the hundred nanometer range. Zooming in, however, to look at the smallest of things – like molecules bouncing around in cells – is impossible. In 1873, physicist Ernst Karl Abbe told us that the best we can do is resolve objects that are about 200 nm apart. That’s 100 times larger than the size of a molecule. All molecules within 200 nm from one another appear as one blob under a microscope. This immutable fact, called the Abbe diffraction barrier, is literally etched in stone at the Friedrich Schiller University of Jena in Germany, and for decades microscopists sighed in resignation.

According to Abbe’s diffraction limit, objects must be about 200 nm apart to be distinguishable under a light microscope.

Of course, microscopes got better over the last century. Fluorescence confocal microscopy did wonders in revealing the inner workings of cells. Yet, resolution remained at Abbe’s limit. That is, until someone in 1990s tackled the problem from a different angle. Rather than trying to change the optics of a microscope, Dr. Stefan Hell exploited a loophole to outsmart the arrogance of light and blast through the resolution barrier.

Hell worked with fluorescence microscopes. Here, molecules of interest in a sample are tagged with tiny fluorescent probes or fluorophores. The fluorescence microscope targets light onto the probes, sending them into a state of excitation, and then detects the photons they emit upon returning to their ground state. Focusing on this difference in states was the crux of Hell’s loophole. He reasoned: the beam of excitation light projects onto the focal plane of a sample in a smear of approximately 200 nm. All fluorophores within that range become excited, emit photons, and thus, any structures smaller than 200 nm are indistinguishable. So, to improve resolution some of those fluorophores must be de-excited.

Hell followed excitation with a second beam of light in the shape of a donut. That second beam was at a wavelength that knocked excited fluorophores back down to their ground state. Thus, all fluorophores in the donut-shaped area were silenced and the effective area of detectable photon emission was confined to the donut hole. Moving the donut over the sample yielded an image with sub-diffraction resolution.

Boom! The mundane donut bumped up the resolution power of microscopes ten-fold and beget the field of superresolution microscopy.

A STED laser constricts the area of allowed fluorophore emission to about 20 nm, bringing resolution into the sub-diffraction range. Stefan Hell’s groundbreaking invention established the field of superresolution microscopy.

All kinds of ideas

Hell’s breakthrough technology, which he called stimulated emission depletion (STED), was the first to open the doors into the nanoscopic world. Later, other techniques also worked around Abbe’s diffraction limit with variations on the approach. Soon, superresolution was the leading edge of numerous developments in microscopy and its impact was recognized with a Nobel Prize in 2014.

Hell shared the Nobel with William Moerner and Eric Betzig, who in 2006 achieved sub-diffraction resolution with a method called single-molecule localization microscopy (SMLM). Like STED, this method exploits the different states of fluorescent probes. Where the technologies differ is in how they localize the probes. STED determines the location of fluorophores by restricting the area where they are allowed to emit photons – so location is defined prior to imaging. SMLM does no such thing. Instead, it randomly excites individual fluorophores and records their individual, smeared-out emission signal. That’s right. Just like light shining on a sample is smeared out, light coming back from the sample is smeared out by diffraction. The changes in pixel intensity of a single, non-overlapping smear are statistically predictable. So, to pinpoint the location of a fluorophore, SMLM fits a localization likelihood curve to the pixel intensities of the smear. That is, location is defined after imaging.

SMLM microscopes localize a signal via an area detector. Due to light diffraction, the detected signal is blurred to a width of about 200 nm, an effect called point spread function (PSF). A Gaussian curve is fitted to the PSF to determine the likely position of the signal’s origin as a set of coordinates with some uncertainty. That spatial range is the effective PSF.

While both methods are available commercially and used widely, neither achieves a resolution much better than 20 nm. That leaves us short of our goal to tell apart individual molecules. What limits their performance is a dependence on high numbers of photons. Resolution could be improved if that dependency were inverted. So, in a world of technologies that scour for maxima in photon emission, how do you use fewer photons?

For that, the donut has an encore.

Hell is not a man to be satisfied with incompletes. He didn’t want to just break through the diffraction barrier. He wanted to push resolution as far as possible. Single-digit nanoscale resolution was his target. He understood the importance of photon numbers for resolution and was frustrated with the photon gluttony of STED and SMLM. So, he asked, is there a better way? The answer was to flip the job of the donut on its head.

Dredge up those faint memories of math and you’ll remember that a quadratic equation describes that parabola, and the minimum of that equation is at the zero of the donut. So, by moving the donut of excitation light and detecting just two emission signals, one on each arm of that parabola, you can pinpoint the fluorophore. The donut constrains the possible location to just the area of its hole and provides the information to determine the fluorophore’s exact position.

In flipping the job of the donut from depletion to excitation, Hell turns the principle of superresolution microscopy itself on its head. Instead of seeking the maximum of photon flux, his new technique determines the location of fluorophores by homing in on the minimum. And so, he named his new donut trick MINFLUX.

Of course, in practice more than two emissions are used for localization. However, each detected emission informs the movement of the donut to determine the fluorophore’s position, so you dramatically lower the number of photons needed (roughly by a factor of 10). Welcome to donut-based, photon-lean microscopic triangulation. And the best part? This shiny new donut knocks down resolution another 10-fold, bringing us into the unprecedented single-digit nanoscale. Molecules are now clearly visible.

MINFLUX defines an entirely new class of superresolution methods that uses the best of STED microscopy and the single-molecule localization family.

Now that we’ve visualized molecules, is it time to retire the donut from its service to microscopy? Hardly. The next trick up its curvy sleeve will likely be the ‘donut of all donuts’. Developers are working on improving localization precision, boosting signal-to-noise ratio, and reconstructing the shape of molecules from fluorophore coordinates. And while several technical advances will pave the way, the donut will definitely be among them.

Any technology designed to reveal the world in added detail is destined to break barriers. As microscopists travel deeper into the strange world of the super-small, a new variation of the donut may bear the next leap across technological frontiers. For now, one thing is clear: Abbe’s diffraction limit is but a speck in the rearview mirror.

STEDYCON: ease-of-use in a shoebox

So, you thought you knew what resolution is but were surprised to find out that light caps the detail of microscope images. There are workarounds, however, that bring increasingly fine detail into focus. Those workarounds push the boundaries of what we can resolve by manipulating where and when we detect signals from a specimen and thus, expand the levers we have to shrink the distance between two points. Details > 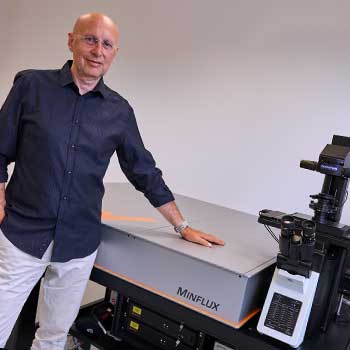 The world’s most powerful fluorescence microscope MINFLUX, based on Stefan Hell's invention, allows to resolve structures as small as a molecule in 3D. 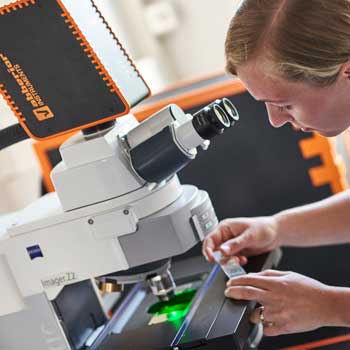 Just upgrade your existing widefield system to a confocal and STED microscope with a resolution down to 30nm. Enjoy fine imaging at the push of a button! 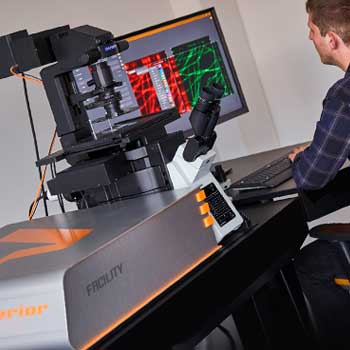 Our FACILITY platform offers you a workhorse instrument that boasts top-of-the-line superresolution STED and confocal imaging. It combines cutting-edge microscopy with unprecedented ease-of-use. 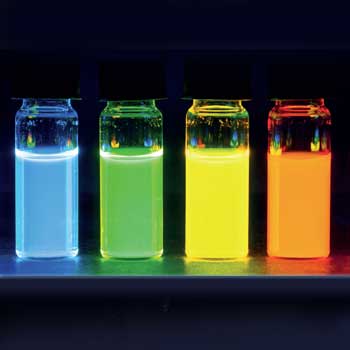 Take a look at our fluorescent dyes. They are perfect for all types of microscopy, such as STED, MINFLUX, confocal, STORM, PALM, GSD, GSDIM, SIM and RESOLFT.